Our captain, Marc, and skipper, Flo, have known the sea long and well. But neither me, nor Jean, nor Adrien (who joins us for the first few weeks), have even so little as spent a night on duty out at sea.

The first day goes well. As we pass the island of the Frioul, the wind drops almost to a dead calm, and the surface turns to glass. We’re a few miles offshore now, and in a perfect position to deploy our first set of water samplers under the hull. These are a simple set of silicon bands, trailing like flags in the water, attached to a steel frame on the starboard side, one and a half meter below the waterline, at the front of the ship.

As water flows by, the rubber readily absorbs chemicals dissolved in the sea.

These will remain in the water until Gibraltar: from there, we will send them back to Norway, and from there to Czech Republic, where they will be analysed and provide us with a first draft of data.

Mounting the filters and temperature recorders on their steel frame goes like a breeze on the quiet deck. I put on a diving suit and a snorkel and swim under the hull. I have the simple task of placing the steel frame on four bolts welded onto the hull, and screwing in the nuts: I regard the whole affair as a ten-minute stroll. Yet when a second later, under the water, I raise my head and behold the huge, looming red hull rolling in a bleak, maddening blue nothingness, the operation suddenly takes another turn. Approaching the bolts is like swimming along a blind animal, and requires full focus, while the dizziness of the blue void under makes me loose all concentration… the first nut slips between my fingers, and I see it sink slowly beneath my feet with a shiver. While I struggle, Flo and Marc put up some sails and manage to make Sonate lean on her side a little under the wind: suddenly the surface comes closer, and I can bolt in the frame with the tip of the snorkel out.

The job’s done: we’re now soaking back in all the chemicals that accumulate in the Mediterranean. 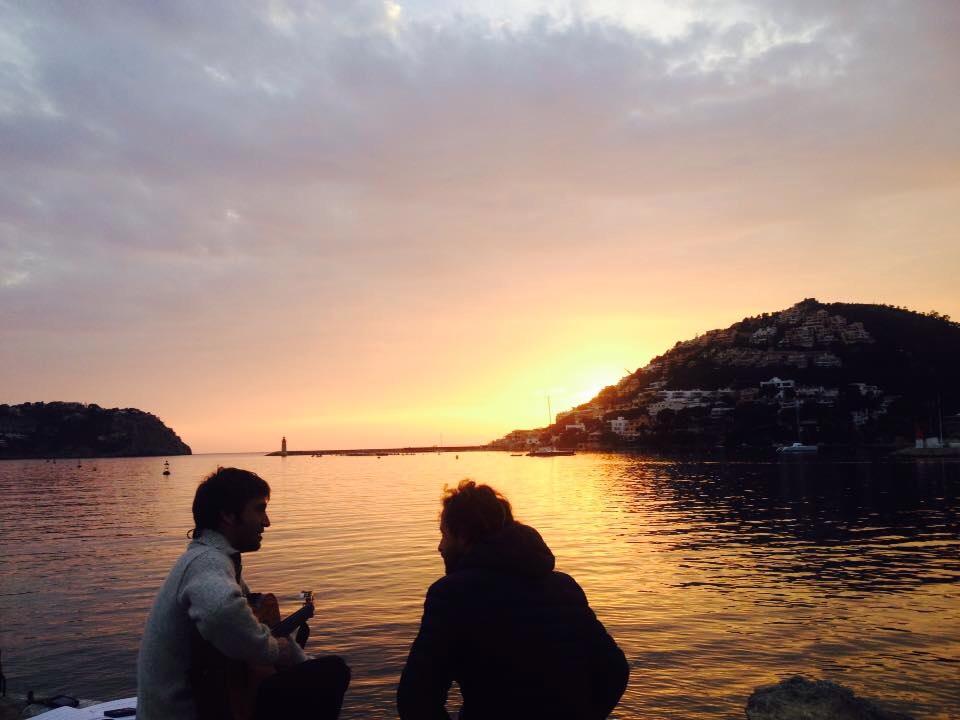 Jean and Flo in the sunset

In the afternoon, the wind gradually rises to 20 knots, and from the East – a side wind on our way to the Baleares, that takes us along at a roaring 7 knots. Sonate is surprisingly smooth – even more than during her last journey, thanks to a hull cleanup, and to our new propeller that folds itself and lets the water flow by – and the sun is hot. Not a bird in the sky, but the sudden roar of a warplane rolling on its back to greet us. And comes the night. The air becomes suddenly damp and cold, and the moon shining low on the horizon makes the waves swell threateningly.

We put on our heavy sea suits that make us feel like cosmonauts, and comically brace up for that easiest of all sailing nights as for the last battle against a raging storm.Flo alone is beaming on that first evening away from the lights of the land..!

Together with the sight of the shore, time has collapsed unexpected. I thought that would be the gift of the long oceanic crossings; when days and days will go unheeded with morning coffee steam in the cool evenings. But there it’s gone already, 50 miles from the shore! and not in that broad, noble collapse, but rather dissolved in the jostles of the ship, in the tension of the hand on the wheel (useless tension, so smooth are the waves! but to me they still seem crashing mountains), in the expectation that something violent and sudden is going to occur. For Sonate is a wild beast in the wind: gone the slack rigging and the resting steel of the hull, now every shroud feels like a raw nerve, tense and ringing, and the iron hull is wound under us like the muscle of a horse. When perchance I doze on the wheel and loose the wind, the sails howl forth a maddening flap. Flo warned us – it takes a good breath to resist the urge to panick when the sails start flapping. Everything’s fine. It’s just sets the boat shivering, and you can’t deny sympathy.

I go to sleep a few hours before dawn, in the starboard bunk, at the front of the ship, low under the waterline. That’s where the jolly, plump temper of the Sonate of the shipyards is stowed away: far from the sound of the waves, the bunk rolls with a smooth, deep rolling, dampening the movements of the ship and lulling me into a pleasant sleep. 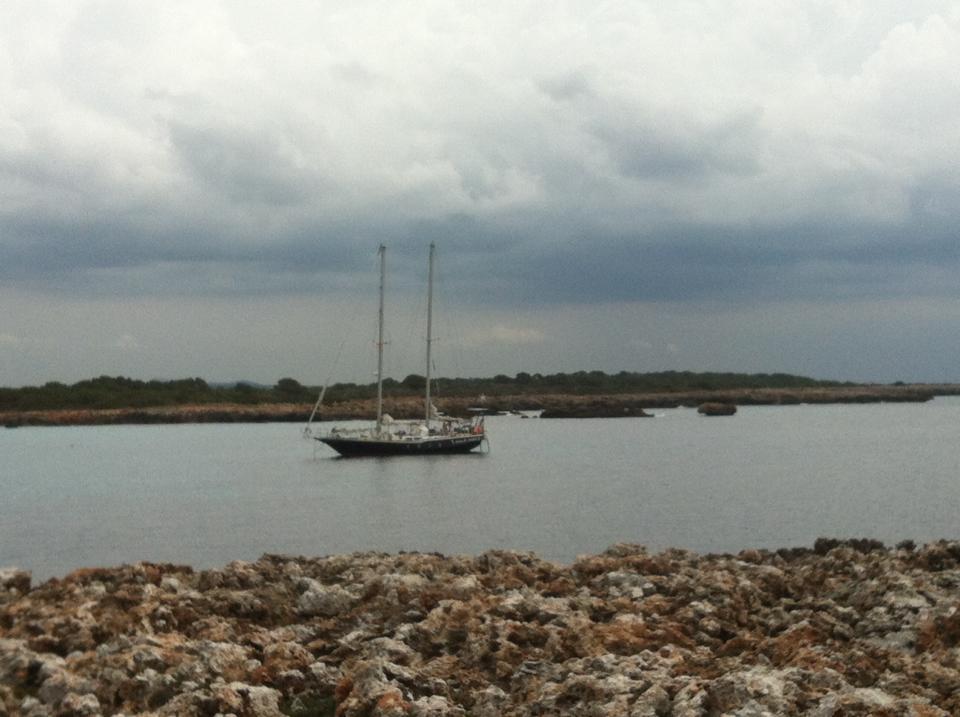