On April 14th – one month precisely since our departure – Gibraltar is crossed and the Atlantic lies before us.

The old sea tried its best to retain us, using the very same tricks that convinced generations of Greek mariners that the world ended between the Pillars of Hercules – the sharp Rock of Gibraltar and the massive Djebel Musa. From Carthagenas westwards, strong westerlies forced us to toil mile after mile upwind, in a puzzling mess of waves, reaching a maddening stance leewards of the strait: there, the narrow way between the mountains forces the wind into a gale, while the tides spilling in from the Atlantic drive absurd currents to twist in narrow eddies. 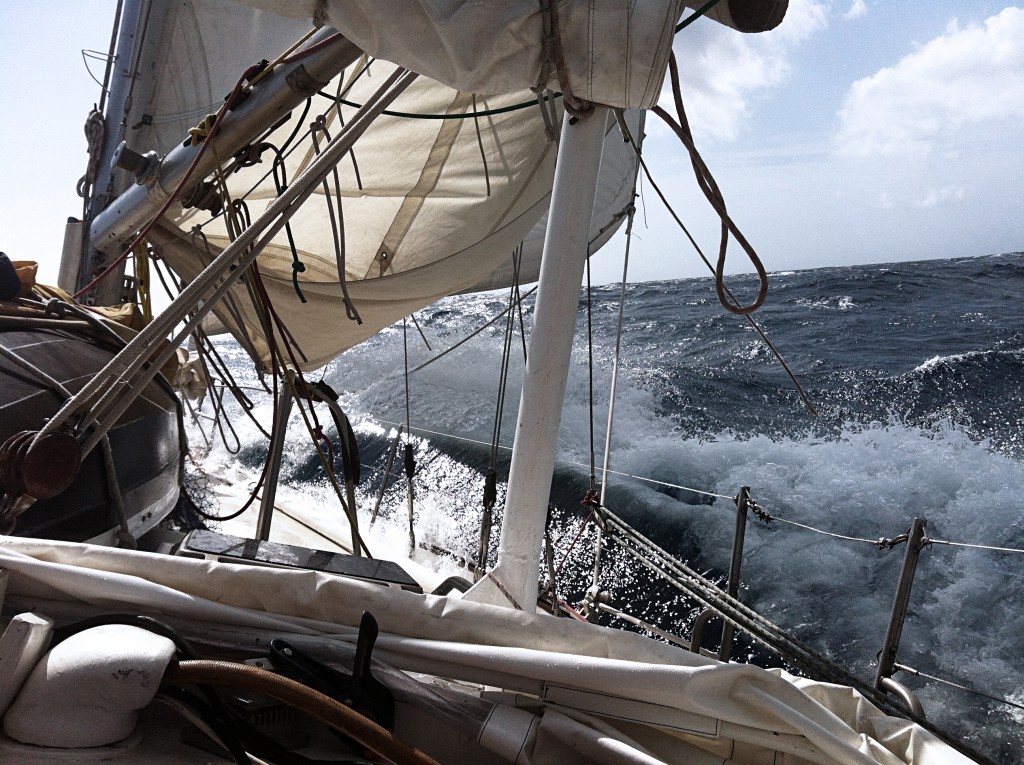 Sonate in the Atlantic

Since the evening, the Pillars have made gloomy appearances in the thick layer of clouds, occasionally catching a gleam of red and purple sunset. As we approach, the heavy tankers crowd in the maritime rail of Algesiras. And there’s a grim poetry in watching them on the screen of the AIS (the compulsory radio-identification system): cargo ships from Greece, Cyprus and Malta on the tracks of their forefathers, Norwegian and Faroese merchants lost in this Southern sea, Liberia, Vanuatu, Marshall Islands, Trinidad and Congo – and all of them sharing the same gone and beaten dress of rusty steel. That’s the whole world we’re starving for, the rolling miles of Atlantic, Pacific and Indian swells humming around us, and the full story already told and scattered on the oily decks…

Around noon, the Rock rises like a giant wave out of the clouds. The wind turns to raging gusts, but under the shelter of the cliffs the sea remains almost without a wave – only a white, tense, shivering surface covered in streaks of drifting foam. We’re sailing up the wind, under much reduced sails, alternating between minutes of immobility and longer minutes where the wind blows a sudden 40 knots that Marc negotiates gravely at the helm.

The air rising steeply up the lush back of Gibraltar condenses and pours forth thick clouds like fumes from the edge of the rock.

Swirls of water appear from the sea, hasten a drunken race across the bow and vanish. And on the land behind them, a red bus drives its comforting way along the shore, and the white cottages around the lighthouse endure peacefully the lukewarm rain. As we pass Europa point and enter the bay of Algesiras, the swells arch up and the wind calms down, and we roll gently around the North Mole into the jolly refuge of Gibraltar, this foolish British version of Monaco tucked inside the green hills of Andalucia. 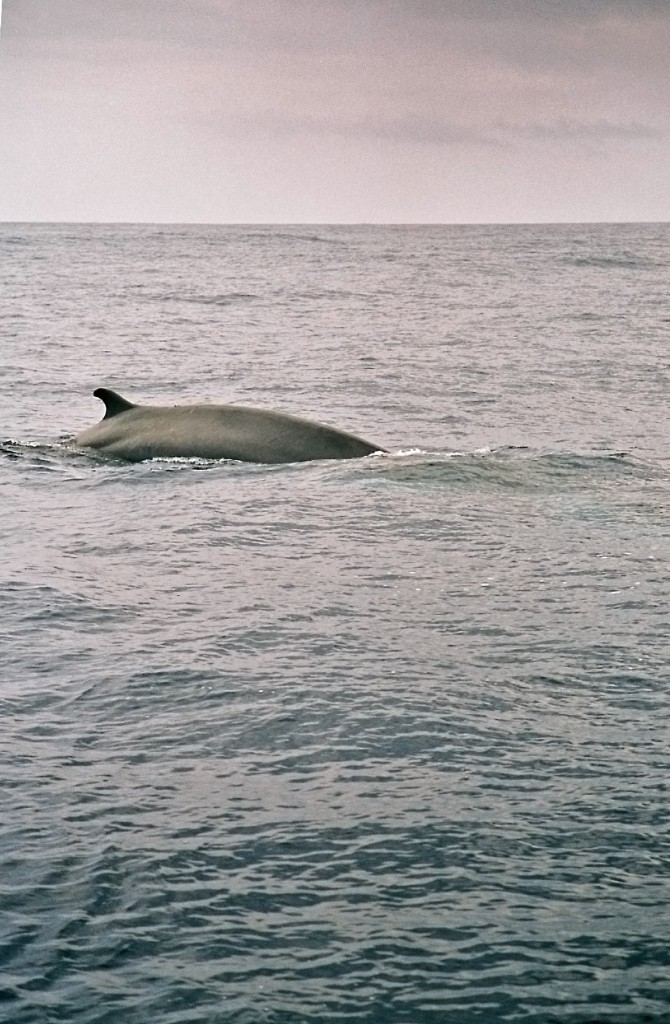 We leave the Mediterranean in the night. The first water contaminant samples have been shipped from Cadiz to Recetox in the Czech Republic, and we stop briefly in a sandy bay to wait for the tide and deploy new air and water samplers. We reach the open waters after much slow progress before sunrise, watched by the swift and silent army ships that suddenly overtake us, all lights off, and scare the hell out of the man on watch. And the newborn oceanic swell surprises us with its huge heaving movement that makes cargo ships appear and disappear as we float up and down. We are out of the fields of drifting nets and fish farms, and lazy green turtles swim past, their head curiously sticking above the surface. We deploy at last our whale-recording hydrophone, towed behind Sonate, in the early hours of morning. We’re lucky: soon, a pod of pilot whales cruises far on our starboard, which we duely write down in the logs. 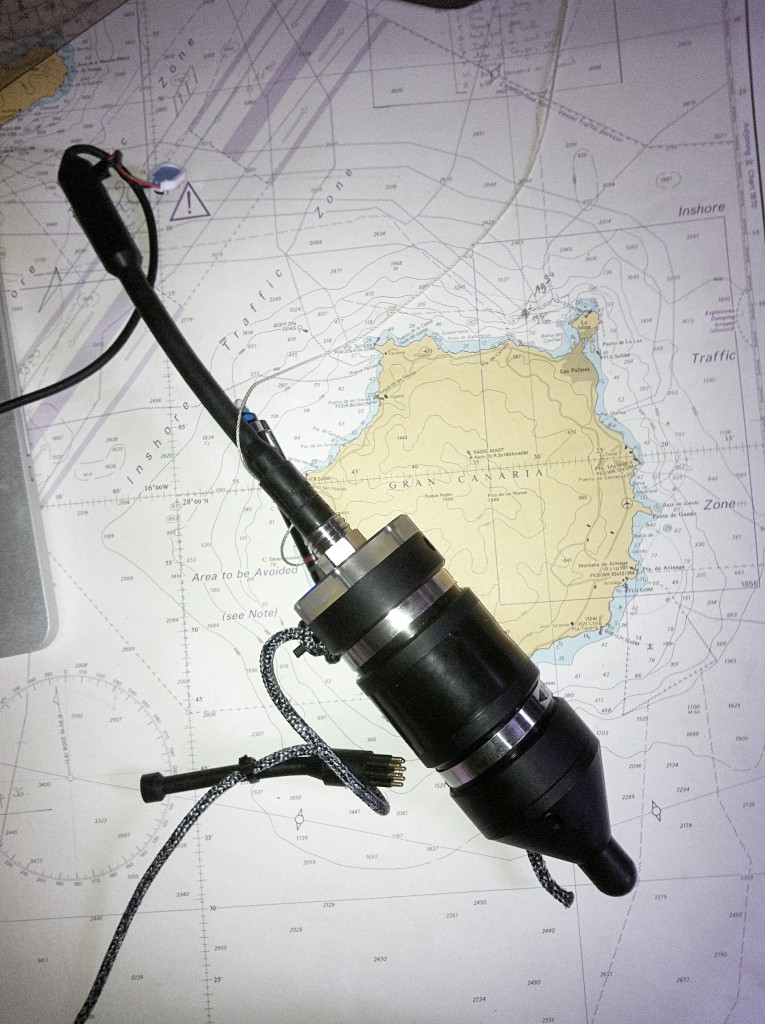 The idea of the system is straightforward: the hydrophone, lent by Daniel Zitterbart from the German Polar Institute, continuously records all sounds underwater – the recordings, in slices of three hours, will be analysed later on by algorithms that pick up the signature whistles of dolphins, pilot whales, and smaller baleens, as well as the click sounds that toothed whales use to echolocate and communicate. We should only miss the larger baleen whales – the giant Fin, Sei and Blue whale – whose low thumping pulses are in the 20 Hz range, quite the same as the hum of the ship and towline themselves. And as if on cue: by noon, a deep blow goes off on our starboard, and the enormous black back of a Fin whale lingers on the surface and sinks again, leaving a mirror of smooth water on the surface. Comes a minute of expecting silence – we know that right here, within braces of out 15-meter, 25-tons ship, lurks a 25-meter and 60-tons, playful and curious but immensely powerful animal. And there it blows again, 15 meters away on our port side: first the point of the jaw pierces the surface, while the long while belly appears underwater and disappears from sight in the distance, and the back arches and raises up and up in the air. And now the whale swims alongside us like a dolphin! turning on its back right under the hydrophone – for a second I fear it will get entangled in the line – and follows us, swimming under the hull, for almost an hour, sometimes floating on its side to eye up our sails…

In the evening, it’s the turn of pods of common dolphins (Delphinus delphis – beautifully striped and swift animals) that take to our bow and spring and roll in the wave at the prow. The gannets that surfed the crests of the waves until now (by groups of two or three – a witewashed adult and one or two dark juveniles) gradually yield to the shearwaters nesting on the Canaries – Calonectris diomedea, that little brother of the Albatros whom we merrily greet as it sails on its back in the fresh breeze. And we are at that point between Madeira on the starboard and Casablanca on the port, as in the poems of Cendrars –

The parrot blue of the sky,

We don’t know how it happened and what happened

But the tone of all things raises by one degree

And in the evening I had the exact proof

The sky was now pure

The full moon another wheel

The last blow of the North is a gray depression looming over Portugal, in whose tail a warm and a cold front roll over us: 7 beauforts of wind raise foaming waves and break some strands of rigging, yet the fear is gone from these broad waters. And in the night, thunderstoms are heavily resting on the flat horizon like paper lights from China, their black and baroque mass cutting a shadow on the slate of the moonlit sea, and shining from the flashes of lightning inside. A sudden hail turns the swells into the rustling pebbles of a Japanese garden. And in the morning the sky is clear and the breeze renewed: by sunset the impossible silhouette of a sperm whale breaches from the water and lands in a foamy feast on the quiet sea. 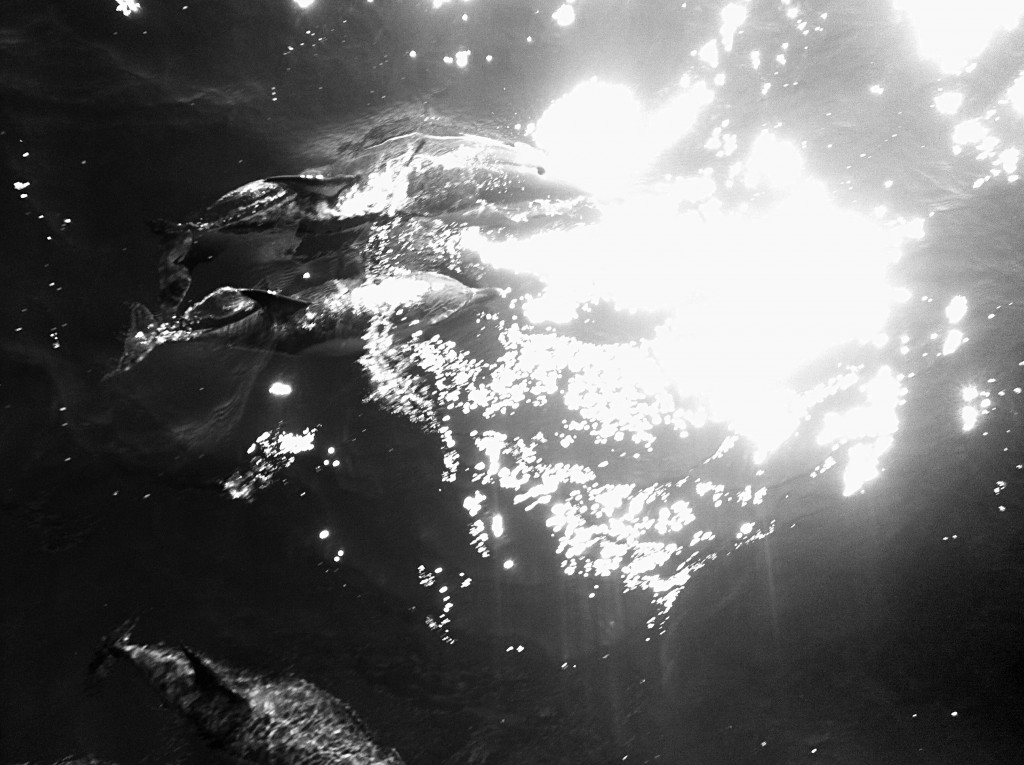 Listening to our first underwater recordings reminds me of the first dive under the hull to mount the water samplers, in the vertiginous clear blue haze of the Frioul. The hull and tow line hum an eerie, dark, fascinatingly minor chord, that pulses with the swells. On the first recordings, the too short 50 meters of the tow line make the hydrophone break out of the waves when we fare fast: the deep resonnance of the boat is broken by a sudden crisp sound of rushing water. Listening to the recording, one suddenly imagines the surface journey of a penguin or a small cetacean, sinking below the waves into the quiet minor harmony of the untroubled sea, and briefly breaking its watery sky for a breath of air.

Days now go down the trade winds of the Canaries: blue skies, warmer water – almost 20°C now – a sun nearer and nearer the zenith everyday that casts its heavy rays down the silent hours of noon, trawling plankton, playing slow music and reading on decks, repairing the dozens little details that break daily on every corner of the Sonate – a pulley, a bolt, a rig, an electric wire, a leak around the rudder… And down we dart the last hundreds of miles to the rocky shores of Lanzarote, that we reach in a warm and gray morning, amidst a sudden cloud of whirling shearwaters and storm petrels.