Our boat is usually a wealthy little country: we never lack food, water, electricity, medicine or books. But in Cabo Verde, clean, fresh water is simply not available.

It has been nearly three months on the water since we left Marseille, and we are now readying ourselves for the leap across the Atlantic, from Praia, Cabo Verde, to Salvador da Bahia, Brazil. A rather more complicated crossing than the customary Canaries-Caribbean passage down the easterly trade winds: we plan on heading South-West down the Northern Hemisphere Easterlies, then South across the confused and rainy doldrums where Northern and Southern air masses meet, then South-West again across the Southern hemisphere trades. The duration of the passage depends quite a lot on how long we stay becalmed, drenched and drifting in the doldrums – but overall, we hope to arrive within a month. 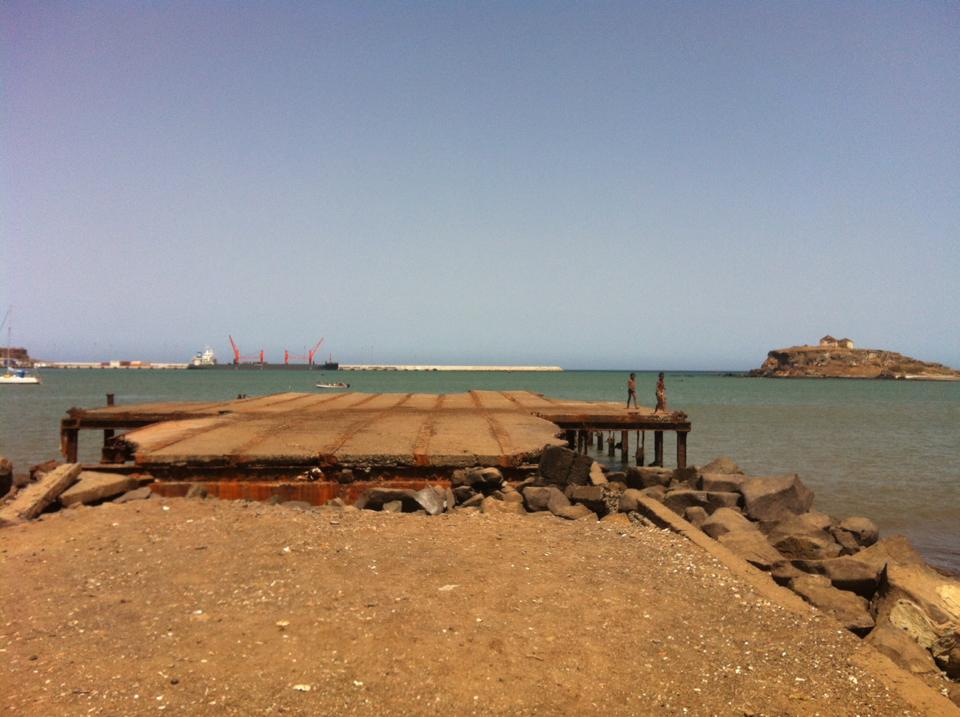 This route has three distinct advantages for a summer passage: 1) we won’t get bored – no regular winds, plenty of work, and three distinct oceanic provinces to visit and sample, 2) we avoid the Northern branch of the Equatorial current that runs fast along the Caribbean coast of South America and would prevent us from reaching the Southern parts of America, or force us, like the Damien, to a long a painful fight against the current, and 3) we stay clear South of the hurricanes that travel West along the Northern Trades. 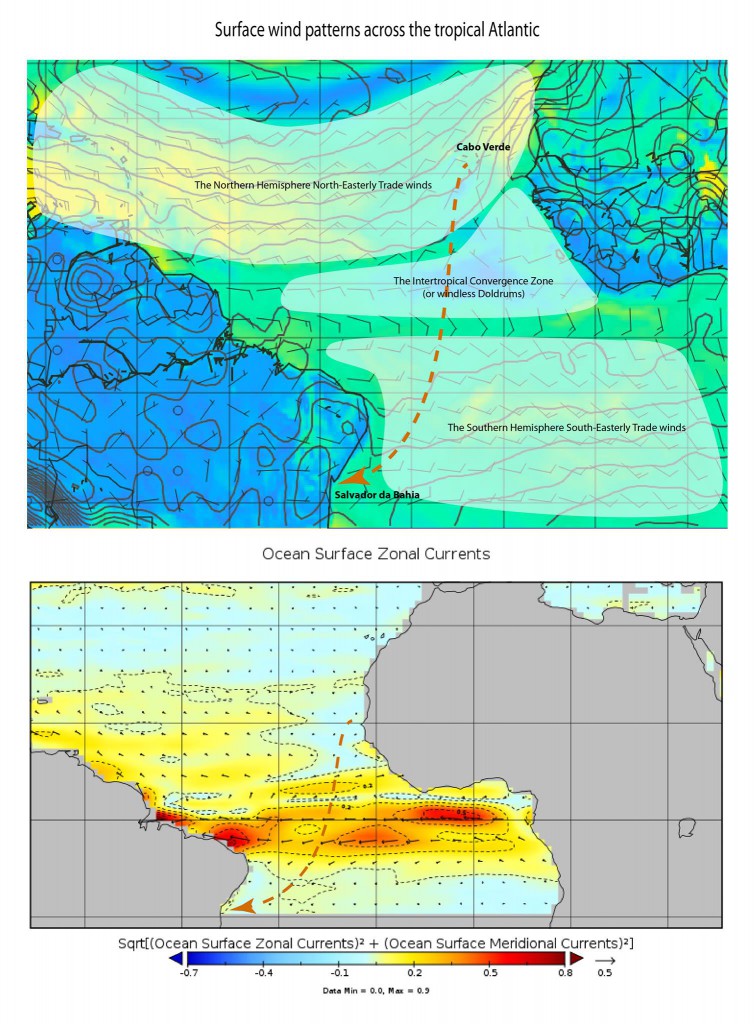 At the national library, in Praia, Cabo Verde’s capital, I stumble upon Germano Almeida’s surprising 1988 novel O Testamento do senhor Napumoceno Da Silva Araujo – the imaginary biography of an import-export magnate of Mindelo, São Vicente, at the time of Cabo Verde’s independence from Portugal. The deliciously witty text reflects a striking aspect of life here: the lack of things, and the difficulty to obtain them. Partly, like elsewhere in Africa, because of the lack of money: but maybe more importantly because of the island’s geography. These dry, rainless, baren rocks now rely on cargo ships and desalinated water for everyday needs.

Few vegetables grow: almost nothing is produced locally (75 to 90% of food is imported). And sailing Europeans end up in the same situation as Almeida’s rich character, Araujo: even money can not buy much here – even hardly fresh water! – because there is not much to buy. But the situation of the islands echoes strongly with our own day-to-day experience onboard: resources are scarce and precious, you need to use and reuse them wisely, invent ways of fixing things yourself without looking for non-existent spare parts, and not wish for more than what you can make by yourself.

Now, one month of full autonomy, such as we require for an Atlantic crossing, is not something you do all the time. We need fresh water. We need food, and we need energy to go through – wind to haul the boat across, and electricity to live our electromane lives: (light, autopilot, GPS, weather forecasts, electronic charts…). In Europe, these are things you don’t really think about. Take electricity. Sonate is something of a science-fiction power-plant: we have four 100W solar pannels mounted on an arch on the aft (courtesey of Dr Céline Le Bohec), two 75W pannels in the shrouds, and one 180W windmill.

On the paper, that’s 730W of 12V current to feed our navigation system, light us at night, freeze contaminant and plankton samples, and even use a computer once in a while – that should be plenty, when you think that a light bulb uses around 5W, and computer around 60W. As a comparison, an average European uses 688W for his everyday life (and an average American 1,683W, which leaves me slightly puzzled) – so we have about 25% of what we are used to, here – that should be very comfortable considering we have no hot water, no electric heating, no oven… That’s all very well, but energy rarely comes when you need it.

Solar panels and windmills produce power in a rather capricious way, with days of bonanza where we can load our batteries to the brink, and long cloudy days when we barely produce enough to run the GPS and a low-power bulb or two. That’s when you start thinking of electricity as a limited resource: you need to decide whether you want to charge your computer, or play music, or charge the VHF radio, or use the autopilot… 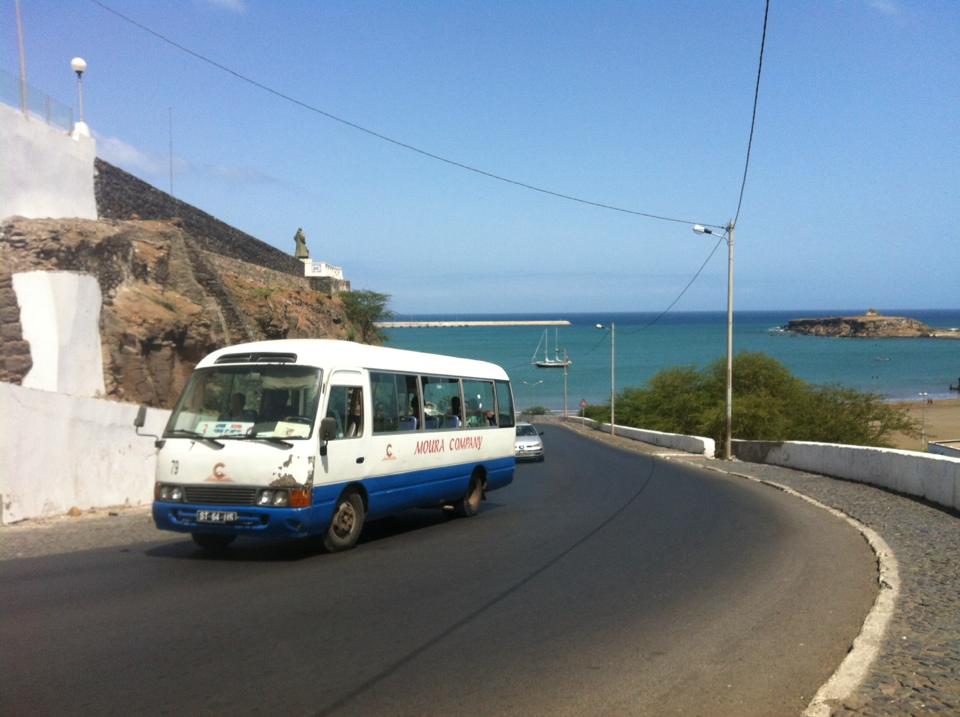 But water is worse. Sonate can ship around 1,500 liters of fresh water in its tanks (which is huge for a sailboat), plus an additional 150 liters of drinking water in jerrycans. Considering the average USA daily water use per person (ca. 550 liters – just have a look there [www.angelamorelli.com/water/]), that’s one day for three people. In France or in Norway, where daily use is around 300 liters per person, our tanks will satisfy the four of us for barely more than 24 hours. But on a comfortable Subsaharian Africa standard of ca. 5 liters per day, now, we should easily last two full months. Looking back at our past navigation, that’s where we are: between 5 and 10 liters per person per day, including drinking, cooking, washing hands, brushing teeth, rinsing dishes, and occasionally showering. We draw water using a foot pump: a stroke holds about 50 mL (a twentieth of a liter), and one quickly learns to consider that a very significant quantity of water.

That’s at sea. But Cabo Verde takes us one step further: even filling our tanks (a 20-minute affair in France or in Spain) is a complicated problem here: clean, fresh water is simply not available. After about three days investigation, we reach the plant of the national water company, Trinidad, in the middle of the Santiago island: there, the scarce rain-derived spring water is treated and bottled up for consumption by the wealthier part of Caboverdian society. We manage to purchase 2,000 liters of untreated spring water, in huge plastic jerrycans, to be delivered the next day by truck on the docks of the fishing harbour. And once our 1,500 liters tanks are full, the remaining 500 liters (less than the daily dose of one North American, remember!) appear like an incredible wealth: we shower rapidly, rinse the corrosive salt away from ropes and sailing gear (a luxury we did not afford since the straight of Gibraltar), but the sight of fresh water running wasted on the ground is so frustrating that we stop before even the rinsing is finished.

Perhaps the most striking aspect of this story is what it takes for four convinced environmentalists, who have been reading and thinking for years on resource economy and geographical disparities between the wealthy North-West and the rest of the world, to actually realise what it means to live short of water and energy.

Yet, unlike in Europe, all that (books let aside) has to be carefully spared and handled, or it could go lacking rapidly in the middle of the ocean. And the surprising part is how easy and comfortable it actually is to live on a fraction of the resources that we routinely use back home in Europe: strange as it seems, we feel no privation, no discomfort, no painful longing for flushing our toilets with liters of drinking water or heating up instant noodles in a watt-hungry microwave. And when doldrum rain will come, then, friends, what a delightful and luxurious bliss..!