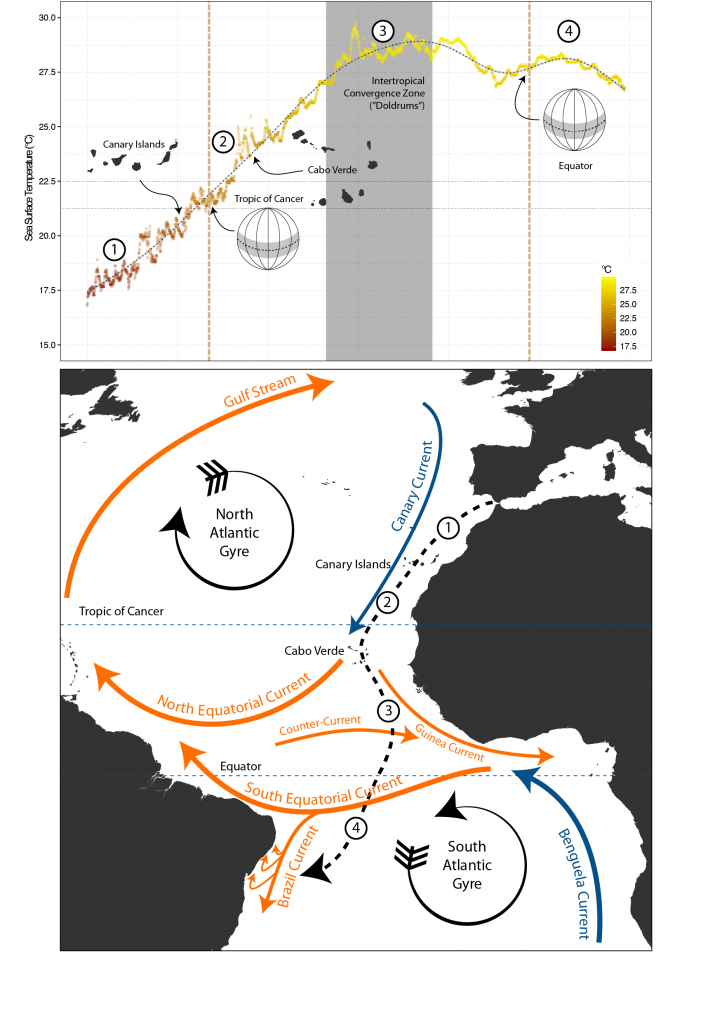 Top: sea-surface temperature from Gibraltar to Brazil as recorded from Sonate. Bottom: our route in the middle of Atlantic currents.

Sonate arrived in Salvador da Bahia, Brazil, on the 2nd of July, after 22 days at sea. The tightly crowded winter squalls held the shore hidden from her until the last moment: when the clouds lifted around noon, they revealed the broken high-rise building skyline of the Eastern neighbourhoods of Salvador. Not a tree in view – gray sea, gray sky, gray city inbetween. The impression lasted but a moment: as we drew nearer, the lush green colours of the shore appeared at the foot of the buildings. A few hours later, we walked through the loud tropical frenzy of the old town celebrating its anniversary.

The interesting thing about an Atlantic passage from Cabo Verde to Brazil is that you get to cross the oceanographic equators out at sea: changing hemispheres means that you will go through about every possible wind direction along your journey. Put simply, each hemisphere could be divided into three almospheric belts: under far near the poles, Easterly winds prevail; in the temperate latitudes or « Ferrel cells », Westerly winds blow; finally, under the Tropics, in the « Hadley cells », North-Easterly and South-Easterly (in the Northern or Southern Hemisphere) « Trade winds » blow regularly. Inbetween the Hadley cells, converging winds create a confused, windless and rainy area, the « doldrums ».

Surface ocean currents are mostly driven by the wind, and reproduce this pattern. So, we have quite precise expectations for the passage – just take a look at the map: from Gibraltar to Canaries (1), we are in the temperate latitudes: little current and Westerlies carrying regular perturbations – clouds, rain, and variable winds. From Canaries to South of Cabo Verde (2), we arrive in the Tropics: North-Easterly winds and bearing current in the North Hadley cell give us smooth and fast sailing under blue skies. South of Cabo Verde (3), we arrive in the Doldrums: winds drop, we meet the Equatorial counter-current, and we drift at the mercy of the passing thundersqualls. Finally, we reach the Southern Hadley Cell (4): the Trade winds – South-Easterly this time – and a bearing current again. We should now be making full speed towards Brazil.

Leaving Cabo Verde is in itself more easily said than done. A glance at the cloud patterns as seen from a satellite (image courtesy of NASA) is enough see that some really, really messed up things happen downwind from these dry islands. Forced between the mountainous rocks, the Northern trade winds become turbulent: they suddenly accelerate to gale forces or disappear completely, and change direction every moment. Thus, we departed from Cabo Verde with strong headwinds, blowing from the South-East, when all weather forecasts announced that the usual North-East Trades were blowing: we only met the Trades two days later, as we finally left the influence of the islets.

The Trades lasted for less than a week: fair winds blowing us forward with two genoas out, one on each tack – 180 square meters of sail to drag us along on a quiet sea! Fearing that the strong Westward current flowing in the Southern hemisphere would carry us into the Amazon (which we all secretely hoped), we decided to keep a good Easting, and headed South-East towards the Gulf of Guinea until we reached the Doldrums – this would give us a reasonable margin to drift later on.
The Doldrums we reached after a week at sea. The winds slowly abated, and finally gave way to a smooth, mirror-like anvil of a sea under the hammer of the sun.

The doldrums are stranger a place that their strange names seems to say. The boiling ocean there appeared totally lifeless: not a bird in sight for days and days – not a whisper of wind to blow a seabird along. Not a whale to be seen on that flat sea – but for the flying fish occasionnaly crashing on the deck, and giving out their last beath on the tragic irony of our steel shore at the end of their attempt at the sky, not a movement on the horizon – but at night the eerie phosphrescence of plankton all around us. 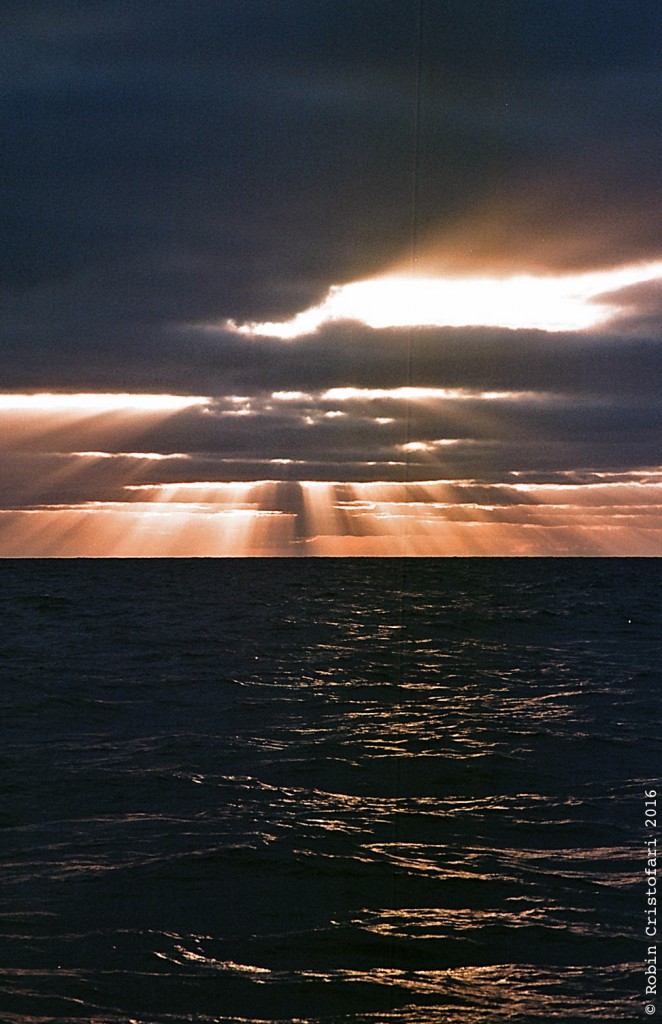 The strange sun of the Doldrums

And the convergence of air masses on the meteorological equator, together with the evaporative power of the blazing sun, forced the warm and moist surface air up into the cooler regions of the troposphere, building mad black and white castles of storm clouds in the sky, that always gave the eye an horizon to rest, and wove the orange sunset into shrouds and mainstays of light around the sails of the cumuli.

« Down dropt the breeze, the sails dropt down,
‘Twas sad as sad could be;
And we did speak only to break
The silence of the sea!

All in a hot and copper sky,
The bloody Sun, at noon,
Right up above the mast did stand,
No bigger than the Moon. »

(Coleridge, The Rime of the Ancient Mariner)

On the third day in the doldrums, heavy squalls started to push us along again. A tropical wave*  passed upon us: strong Southerly headwinds helped us along on a still flat sea at a roaring 8 knots through the blackest of all nights, under downpours of water (we filled up our jerrycans – 35 liters – in less that one hour), until the wind strengthened to gale force, and tore our genoa. Sails reduced, we went on at full speed for a day. 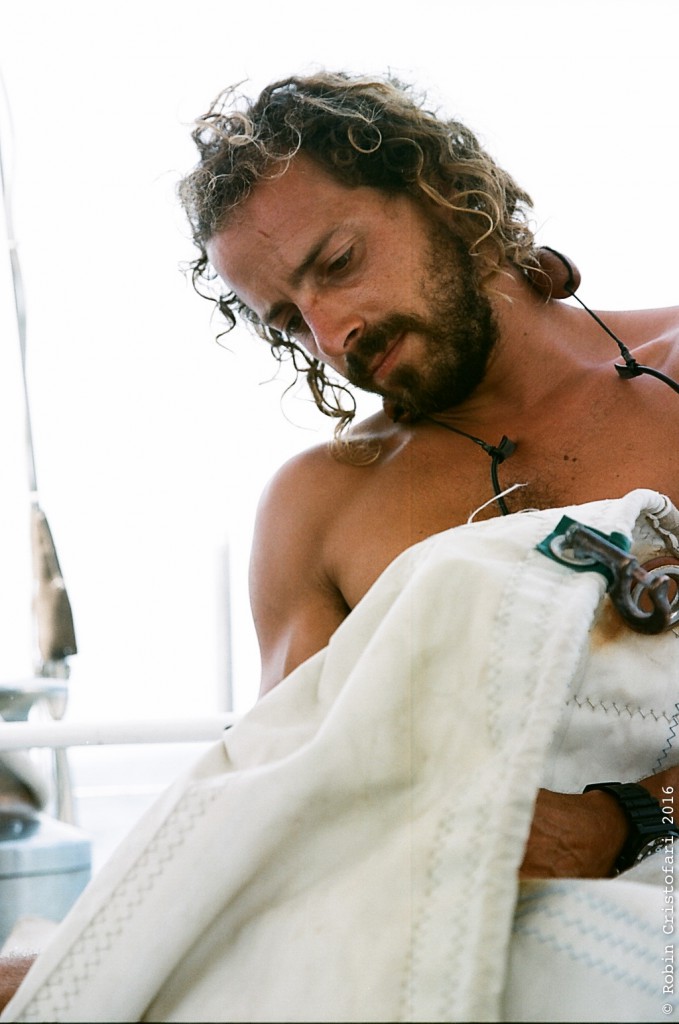 We reached the convergence of Northern and Southern surface waters: for a day, the sea was littered with rafts of floating algæs that rustled along the hull, polystyrene boxes – some capped with a dead unfortuate flying fish – plastic bottles, floating high-heeled shoes.

Slowly, the sea around us was changing: broad swells were reaching us from the South-East, betraying the Southern hemisphere Trades blowing a few hundred miles further ahead, while we were still waiting between dead calms, squalls and endless drizzle.

Finally, we reached the Southern Hadley cell and the Trades picked up. First as a fresh breeze, soon strengthening into a near gale: the sea, building up over the days in the heavy swell, was becoming very rough, with throughs of sometimes 5 meters. The first days, we headed close into the wind, and Sonate ploughed heavily through the water, jumping off the crests of the waves and landing in heavy explosions of foam. Then, we slowly took to the West, and met the wind on our side: and sent Sonate surfing, gently flying up and down the waves without a bruise. Now with the wind and the current on our side, the miles went past by the hundred, while the water and the air cooled down day by day. Squalls continued, but tasted different now: these were not the purplish-black equatorial squalls of the doldrums, but light-gray, rainbow-bearing downpours, their heavy drops softening the sea into a Japanese pebble-garden – the first signs of the rainy season on the forests of Brazil. 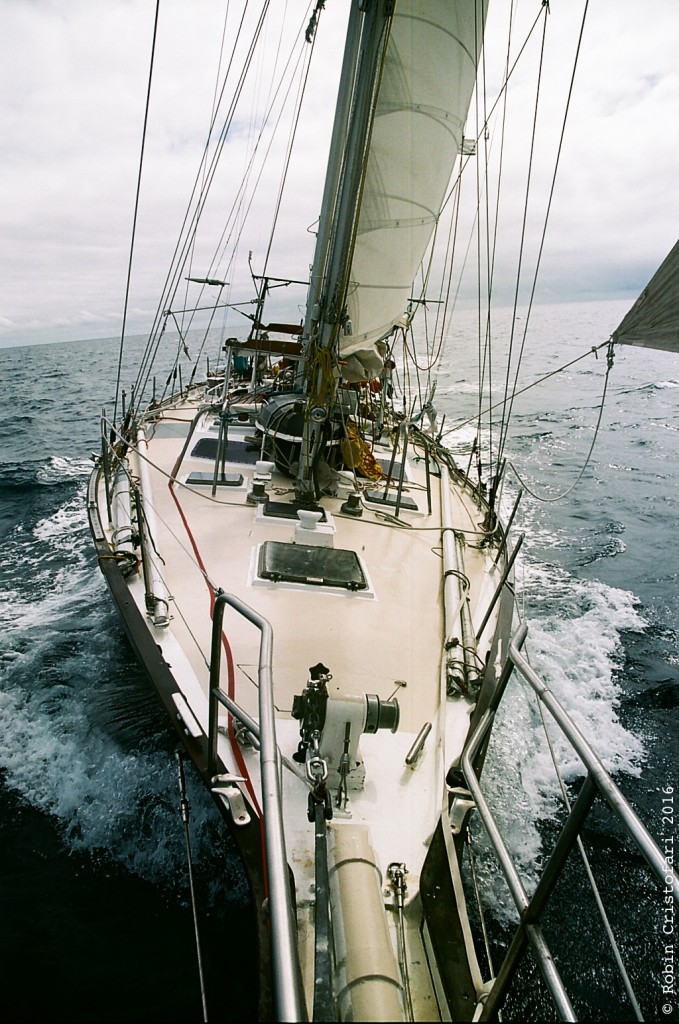 * A tropical wave is a wave in the pressure fields in the upper atmosphere, that translates, at the surface, as a shift in wind direction and a thich squall line travelling Westward from the coast of Africa, sometimes giving birth to a cyclone by the time it arrives in the Caribbean.