There has been a sudden change around us last week.

Since Cabo Verde, we had lost tracks of the seasons. It was june, hot and sunny: Northern summer. Then it was July, Southern winter in Brazil: hot and sunny again. We sailed down the Brazilian coast in fair breezes, bright days and fresh nights, except for the cloudy and wet spells of the passing cold fronts that suddenly turned tropical bays into Norwegian fjords. 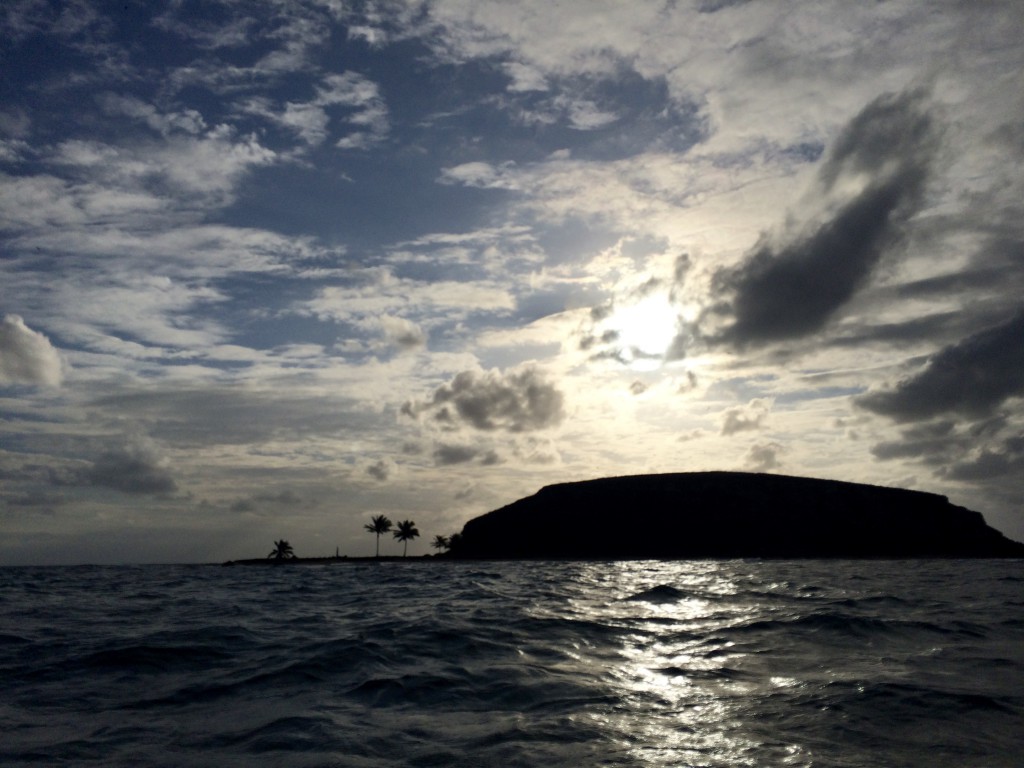 Our first stop after Salvador was in the Abrolhos islands, a marine sanctuary off the coast of Espirito Santo – a set of wind-beaten rocks, inhabited by flocks of brown and masked boobies (Sula leucogaster and Sula dactylatra), red-billed tropicbirds (Phaeton aethereus), the rare Brown Noddy (Anous stolidus), and above all the well-named Magnifiscent Frigatebird (Fregata magnifiscens). 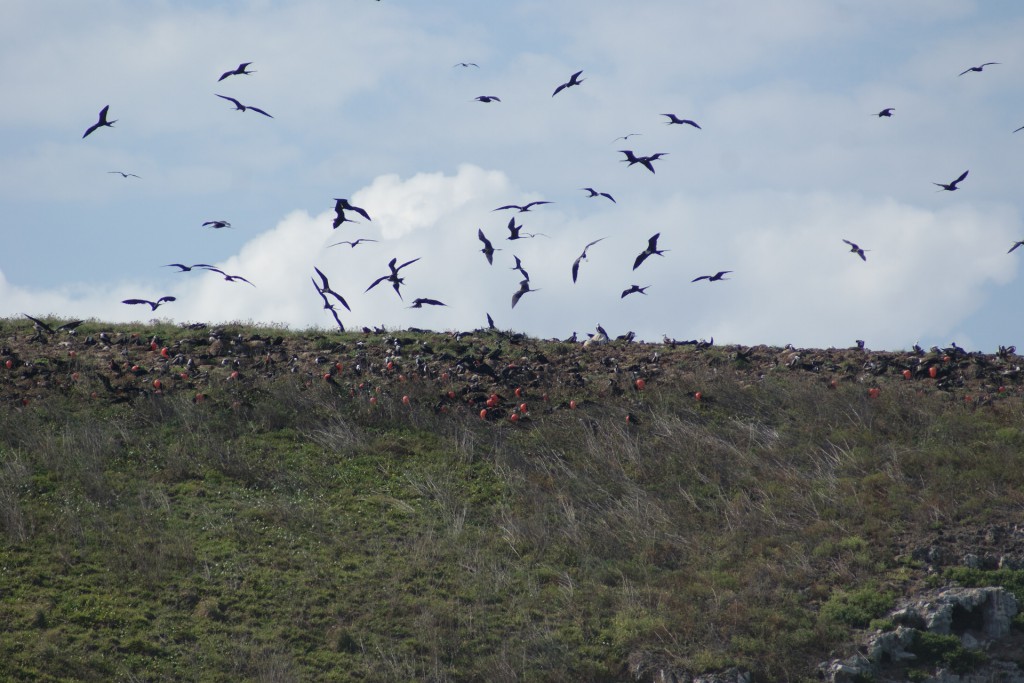 Frigatebirds haven’t left us since. These birds seem to exist only to provoke awe and fascination in sailors of the Southern seas. Enormous yet etched as out of broken glass and razor steel, their black and sharp silhouette cruises high in the sky above our masts, their forked tail twisting to control their expert flight. In the Frigatebird, the long and benevolent bill of the Albatros has taken a cold and cutting grin. The male displays a large, blood-red patch on the throat that he inflates in the mating days – seen from afar, the dark rocks of the rookeries are speckled by parading males like cactuses by bloody fruits. Frigates sometimes fall down from the sky with a medieval movement of falling angels, but never reach the deeps: they open up their wings in a broken motion before they touch the water, and in one ample, masterful movement of the neck, they pluck the fish from the surface and slowly rise again, flapping their wings like ancient pterosaurs. Often, grand Frigatebirds break into a reckless chase after the tiny and agile terns: they plunge down on them them over and over, enveloping the smaller bird in the terrifying flapping of their black wings, until the tern spits back the fish it had just caught – the frigate then picks it up in the air and slowly flaps away. 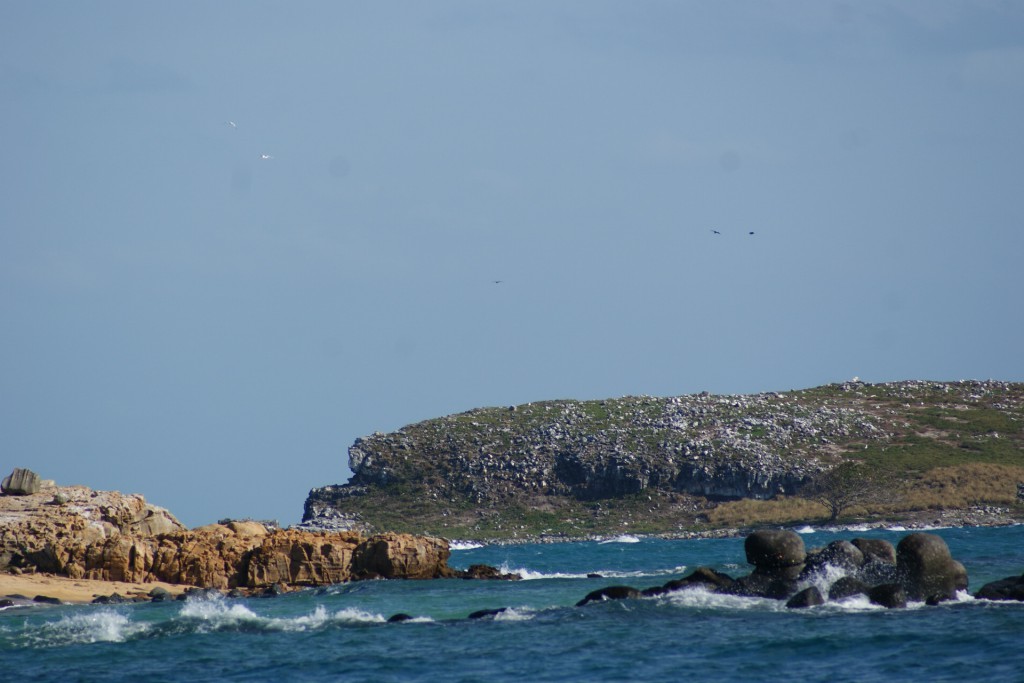 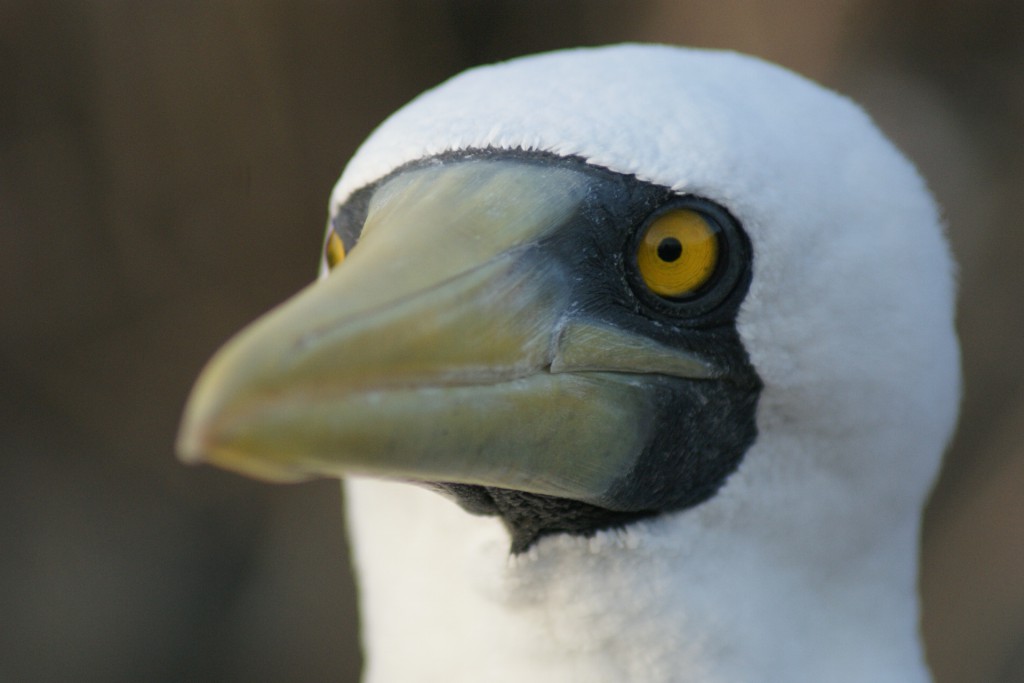 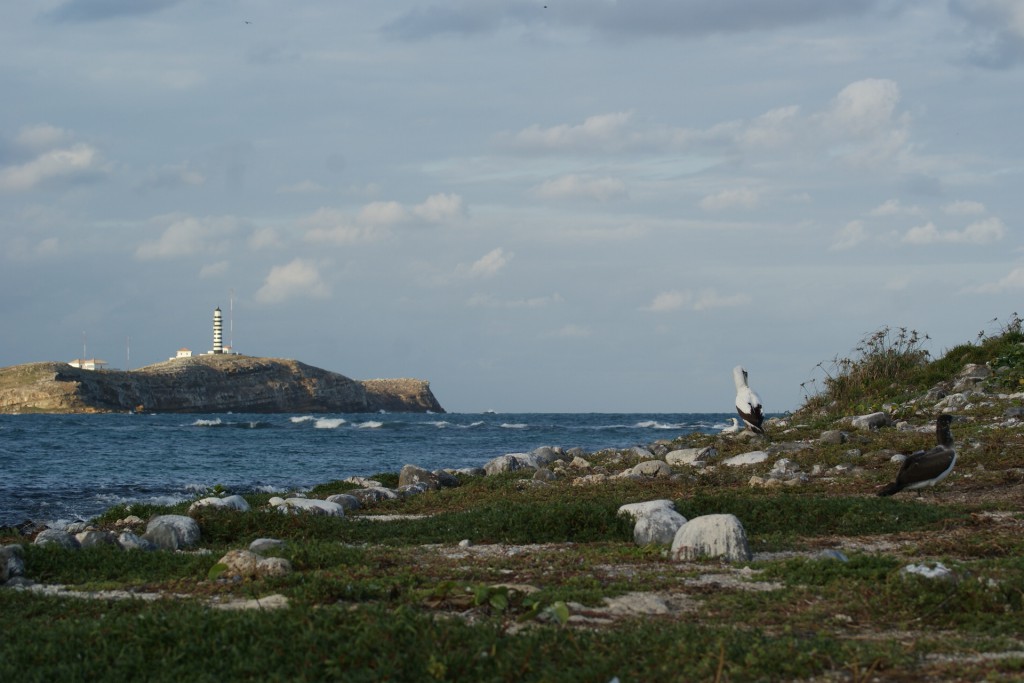 Under the terns and frigatebirds, the sea of Abrolhos is teeming with life: flocks of fish that mirror the flocks of birds, turtles, and the great Humpback whales (Megaptera novæangliæ) that gather around the islands to breed. Sometimes the giants breathed right against our tiny zodiac. Sometimes they breached high in the air, falling down in a momumental splashing. And one morning, sailing South from Abrolhos, we saw a large red stain under the surface. We had seen a small, shabby-looking fishing boat near and were afraid some kind of poaching was going on, so we turned round and came back on the spot: and there we met a tiny (4-meters still!) newborn Humpack whale, clumsily swimming towards us with its head and tail sticking out of the water and looking curiously at our sails… this lasted a second, just time for us to turn around again and leave the calf and mother alone. And still, I must say I am quite happy to think that Sonate was the first sight of the world for that one little whale. 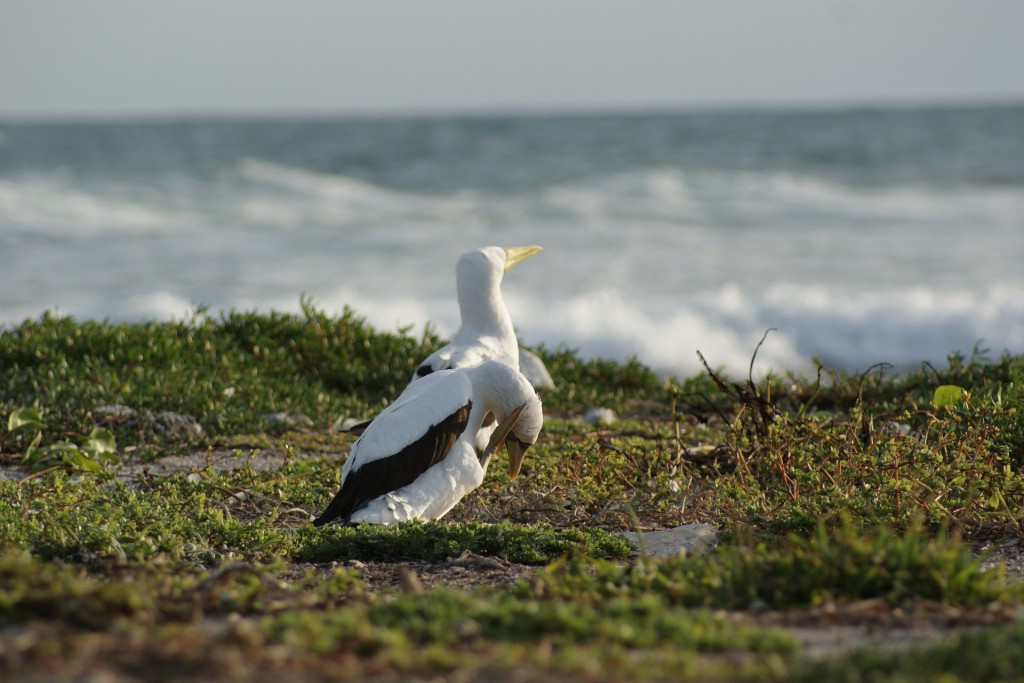 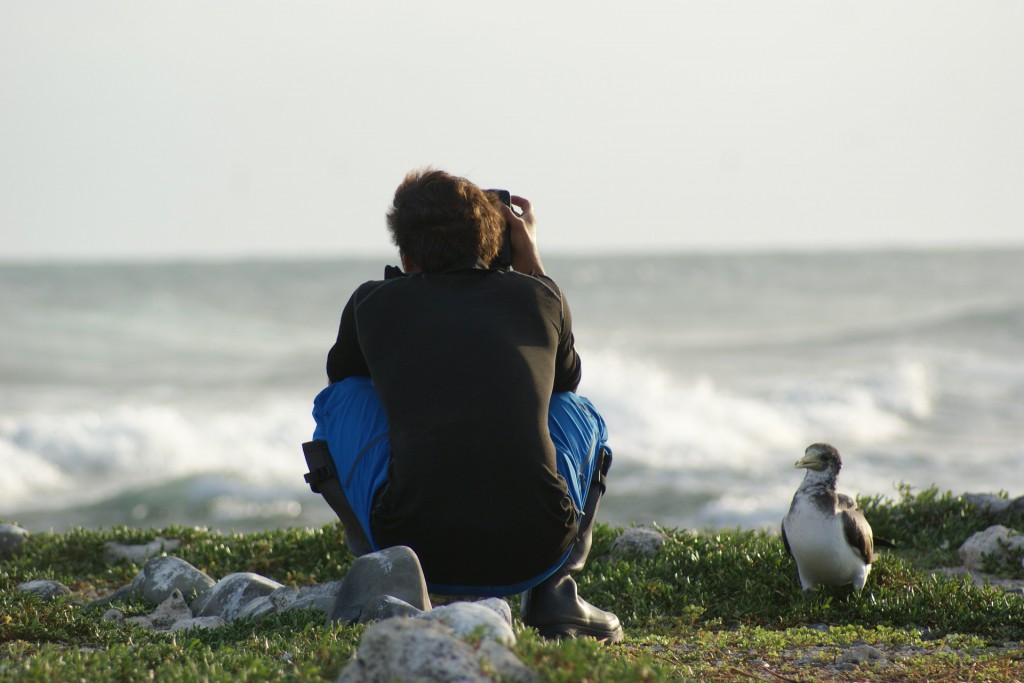 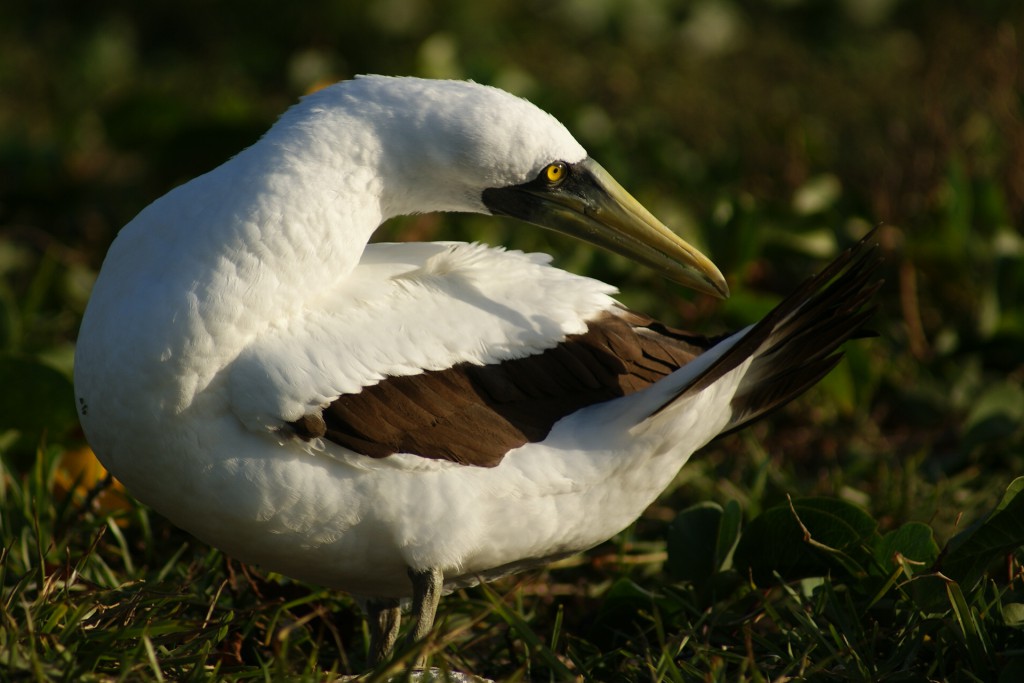 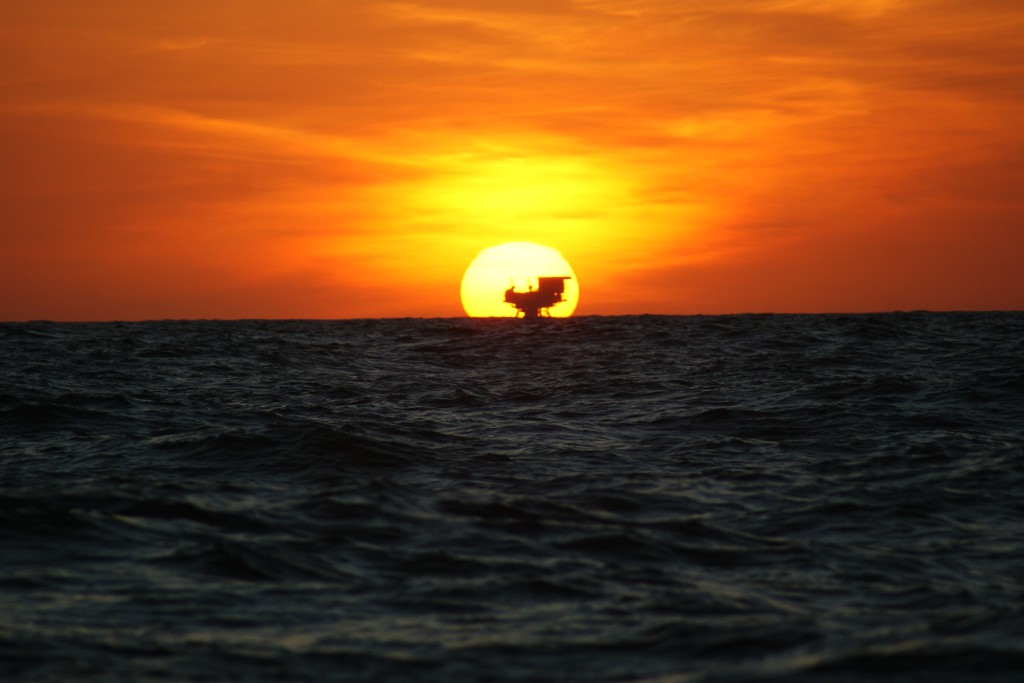 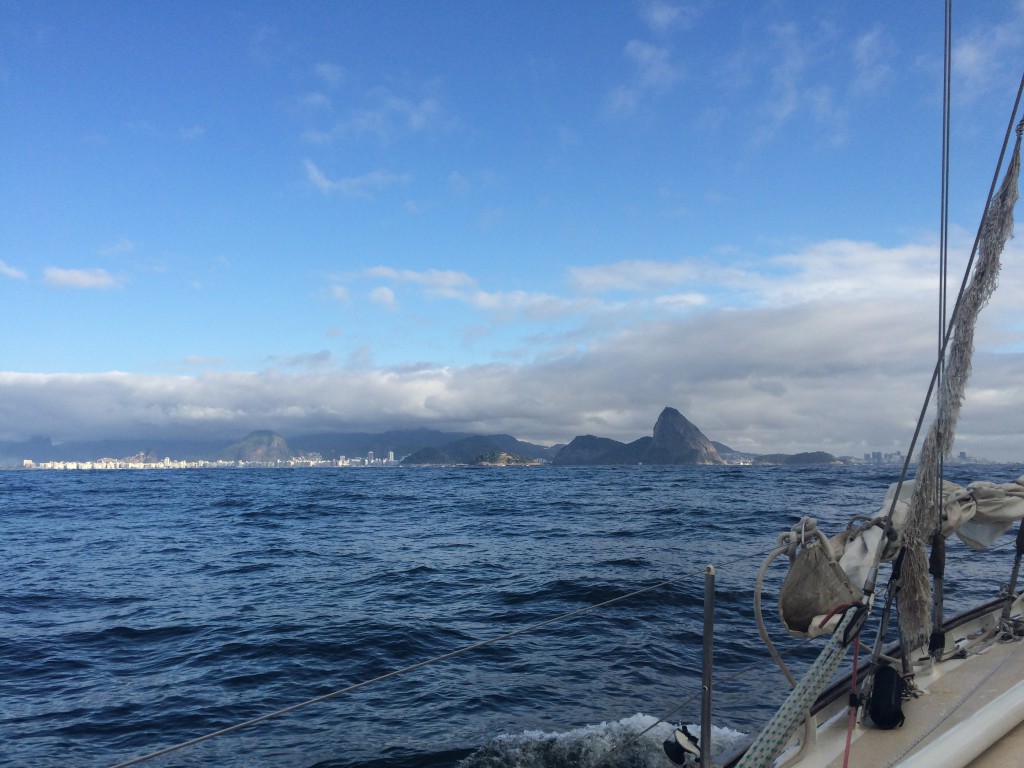 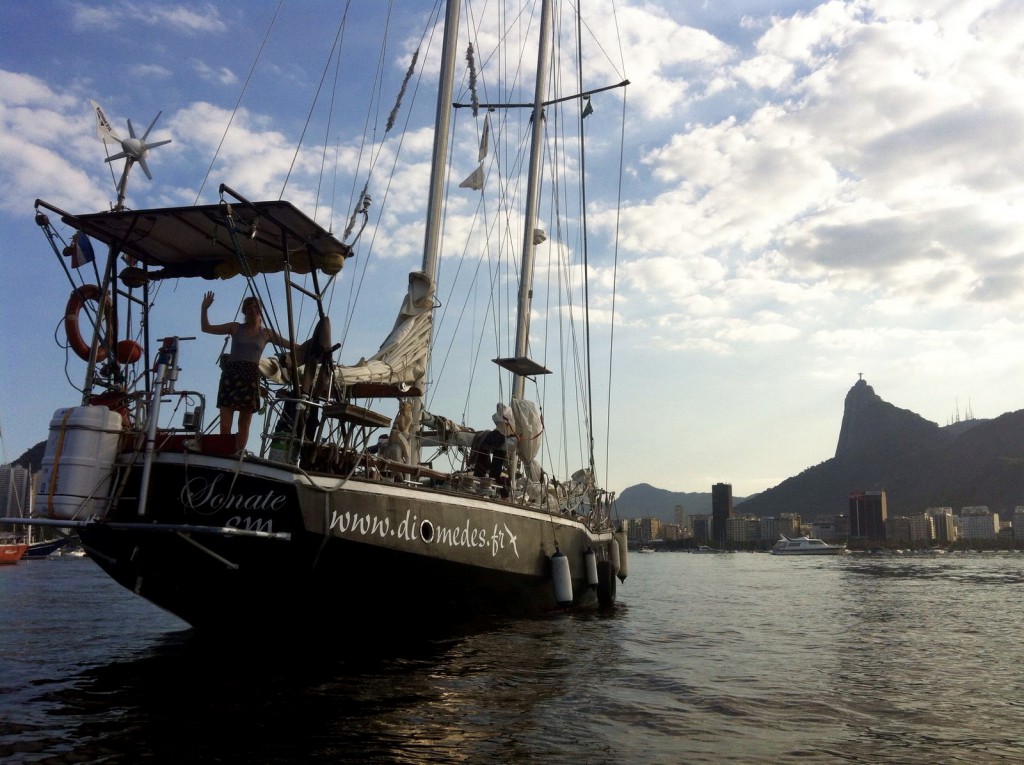 We are now at the anchor in the bay of Imbituba, south of Florianopolis. As we sailed down from tropical Paraty, in the state of Rio de Janeiro, something in the sea changed: there was that sudden thick characteristic smell of dimethyl sulfide that reveals abundant algæ under the surface, there was a dry, cold taste in the air, and there were different birds around us: white-chinned petrels (Procellaria æquinoctialis) that used to greet us in the stormy seas around the Crozet islands, the rare spectacled petrels (Procellaria conspicillata) that only breed on the remote island group of Tristan da Cunha, but above all, the first Albatrosses! Elegant yellow-nosed albatrosses (Thalassarche chlororhynchos) were now sweeping the waves in that smooth, stable yet whirling movement that I had missed so much, and greeted us  at last in the subpolar seas. Putting down the anchor in Imbituba, we met a small female South American Fur seal (Arctocephalus australis), playfully swimming around us – and now, off the coast swim the heavy Southern Right whales (Eubalaena australis). And penguins at last..! young Magellanic penguins (Spheniscus magellanicus) that breed down in Patagonia float lazily around us everyday. 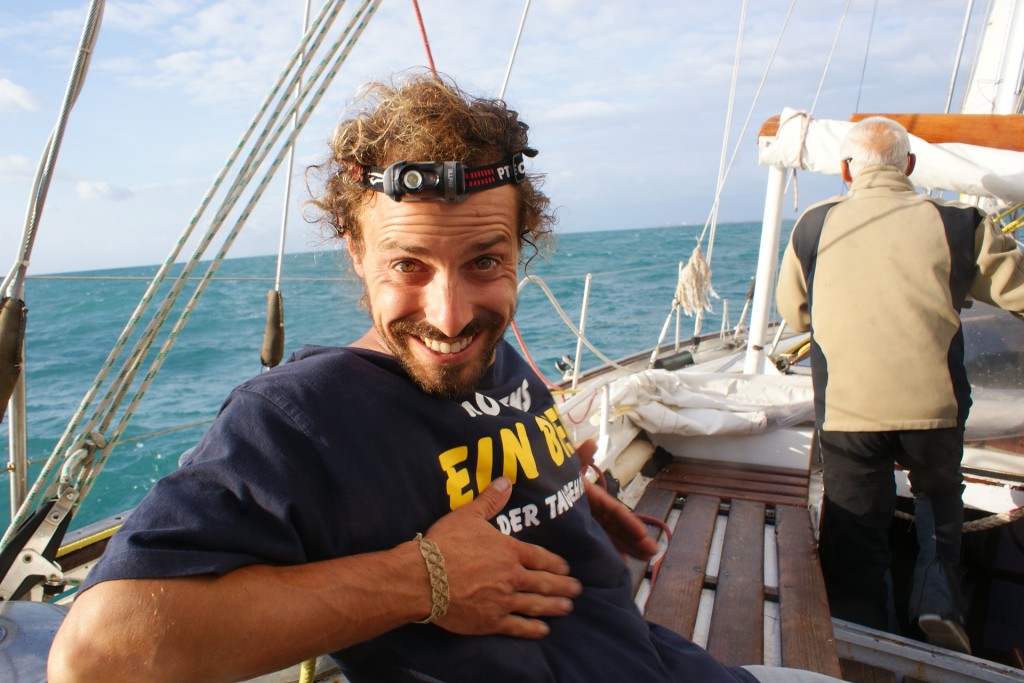 A few miles down the coast lies the backwater harbour of Laguna, which would not have excited us too much if it hadn’t been mentionned in Whitehead & Rendell’s excellent book on cetacean culture: there, amidst nondescript concrete houses and decaying fishing docks, takes place one of the stragest fishing rituals I’ve ever seen. For generations, a group of bottlenose dolphins (Tursiops truncatus) has been helping out local fishermen: humans stand waist-deep in the estuary, armed with round casting nets, and wait for the dolphins to gather the fish in front of them. The dolphins do not seem to get anything out of it apart from a bit of fun – and they don’t seem very intensely involved either: they just hang around for a while, come and help out the fishermen for ten minutes, then swim away again. On the shore, flocks of gulls and egrets wait for the leftovers. Nobody really seems to be much impressed by the strange piece of cross-species cooperation going on here. The whole scene leaves an extremely strange feeling of having left the realm of normality. 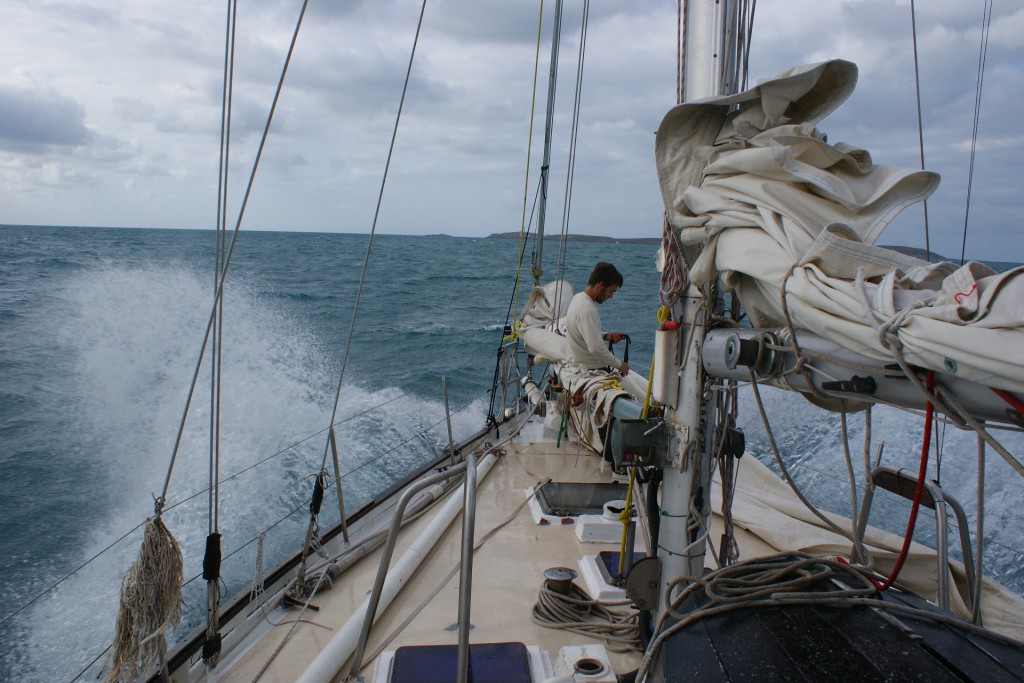 Now everything here, in this end of winter, is a mix between the dusky tropics and the clear high latitudes. The dusty cargo ship harbour roars at the end of the sandy beach where huge cold swells break. Inland, the mata atlantica (the Brazilian Atlantic jungle) is turning into a temperate forest that feels more familiar – in the clearings, the cows are now of European race, and not the Indian cows of the tropical ranches. On the hillsides, pinheiros (pine or araucaria trees) grow in thick, slightly alpine forests and give sappy, chestnut-like fruits. The weather is rhythmed by the pulse of passing depressions that roar off the Uruguayan coast: a day or two of North wind in the wake of the offshore anticyclone brings us damp and warm tropical air, and a thick blanket of low clouds – right after, the passing cold front brings us Southerly wind and cold, dry, crips air masses from Patagonia and the subpolar latitudes – the sky then clears up, the temperature drops, and we light the stove inside: Sonate rocks gently in the cold, cosy nights, waiting for enough North wind to sail down to Rio Grande do Sul, our last Brazilian stop on the way to Uruguay. 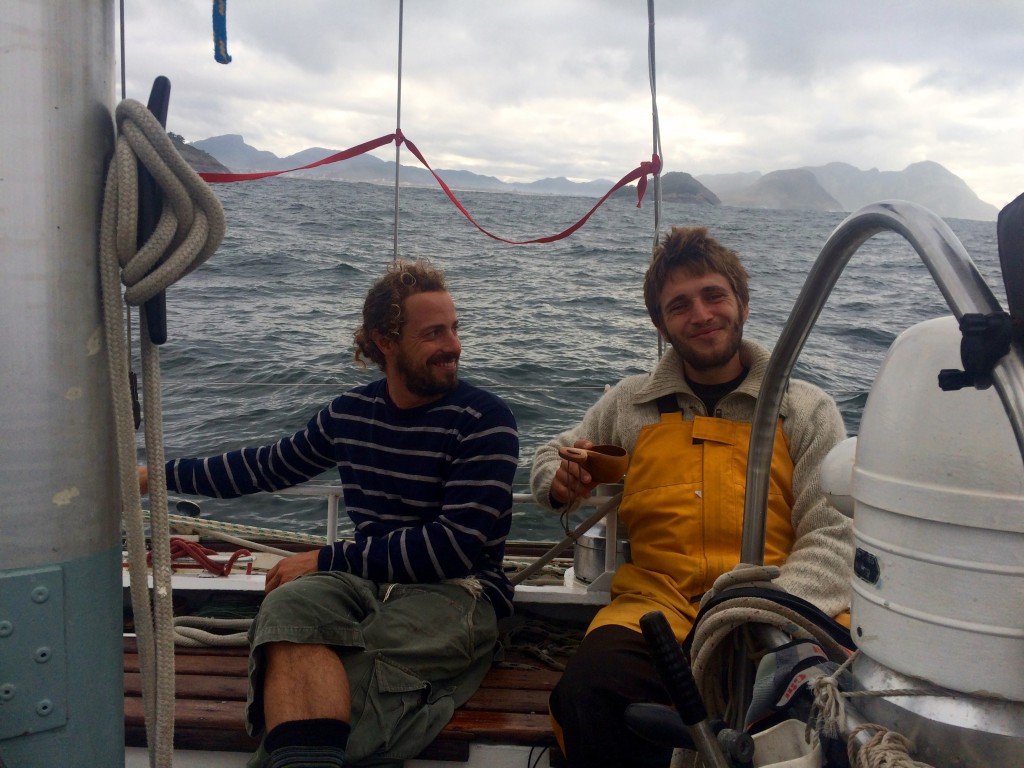 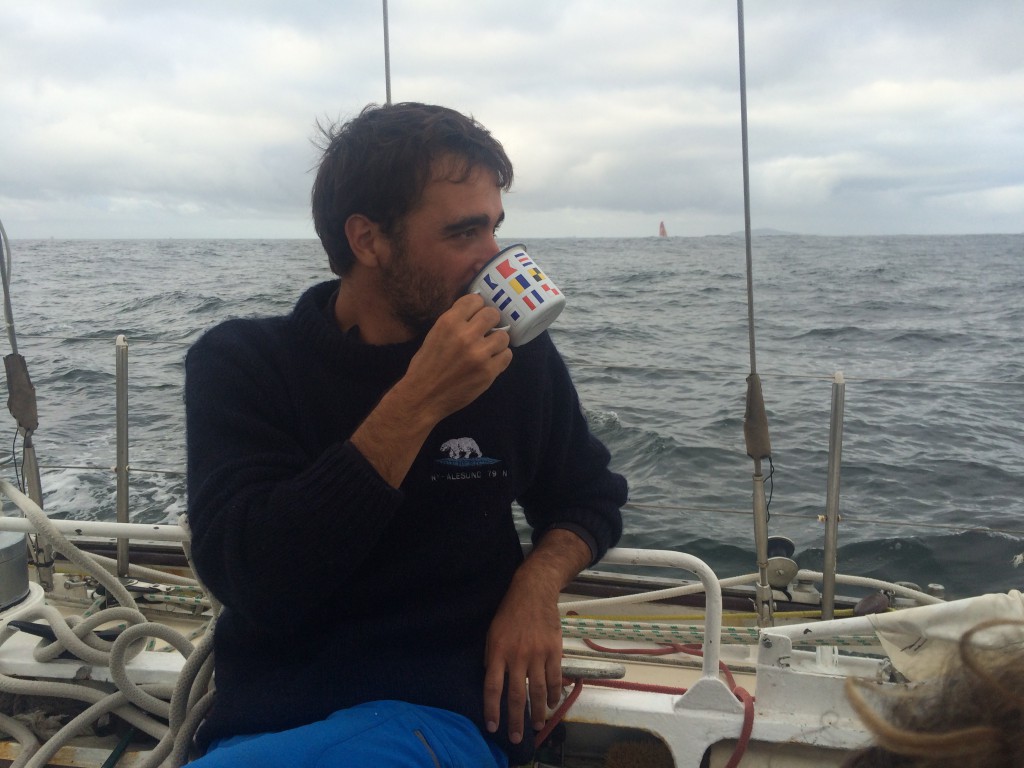