We use passive samplers to detect contaminants in the water and in the air over time. The principle is simple: we use a highly absorbant silicon membrane that is exposed during up to two weeks, and that soaks in all the organic contaminants around it. Water samplers are attached under the hull of the boat, near the prow, where the water flow is strongest. Air samplers are at the helm, mounted on an arch 5m above the water.

Since the detection of contaminants also depends on the conditions in the water and in the air, we continuously record the temperature and salinity in the water, and the direction, temperature and speed of the wind. This way, we can for example deduce where the air pollution was coming from. 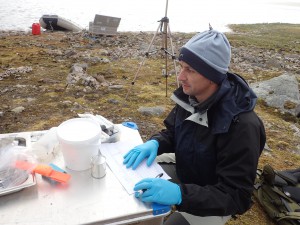 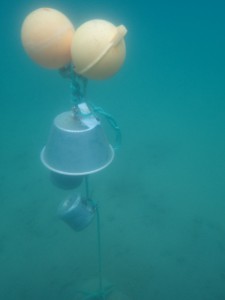 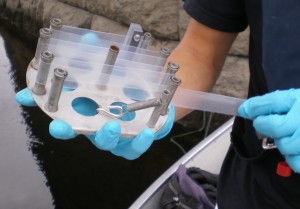 After a certain amount of time, we switch the passive samplers with new ones, and we freeze the exposed ones. And just like that, we have our contaminant sample to send back to NIVA and RECETOX – where researchers Ian Allan, Luca Nizzetto and Branislav Vrana will start the chemical analyses.

We use a “soundtrap” hydrophone to build a picture of the underwater soundscape. At the regular intervals, the boat is stopped entirely and becomes totally silent. Then, the hydrophone is lowered into the water, and records all sounds around. On these recordings, we can identify marine wildlife through its sound signature (for example the clicks of sperm whales or the songs of baleen whales), but also the rumble of engine-powered ships…