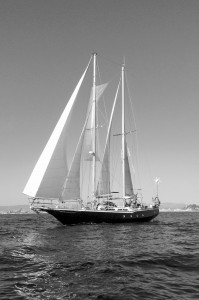 La Sonate is a 15.6m steel-hulled two-masted sailboat built in 1980 in Biot, in Southern France. She has already sailed several times across the world, from the North Atlantic to the Southern Ocean and Subantarctic regions. She is equipped as a lightweight, low-impact oceanographic ship. She is fully wind and sun-powered, and won’t need to emit an ounce of CO2 to get her lab running.

When we bought La Sonate in Saint-Malo in May, she had been sitting for some years on the docks, and needed some thorough repair. After Marc and Florian sailed her down to Marseille (a long and stormy cruising through the Bay of Biscay and Gibraltar), she was hauled on land in the Corbières shipyard, in l’Estaque, at the ourskirts of Marseille. Florian and Marc directed the works, and with the help of good-hearted friends she is taking on a second youth. The hull has been sanded, the rust hammered away, new patches of steel soldered on at places, and she is now painted afresh. The 17 sails have been all sewn back together. The 70-kg cast-iron gear box was hauled out, taken apart and cleaned. The electricity was remade from the ground up. Digging into an old ship is like exploring a jungle: useless wires cling like ivy in the corners, old antennas grow on the masts, and accumulated rust and dust have sedimented down in the bottom of the hull…

We decided to give her some more vivacity with a new propeller from Ewol Tech, in Italy – a folding propeller that will not get in the way when going under sail, and gives us a full extra knot of velocity – and extra safety if we need to escape bad weather. More to come on that as soon as it is in place..!

We still need to build an arch at the helm to support more solar pannels, a balcony to facilitate the access to the water, and to setup the navigation system: and in a matter of a few weeks, she should be ready to set sails..!